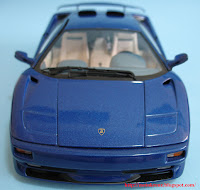 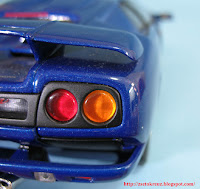 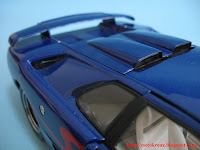 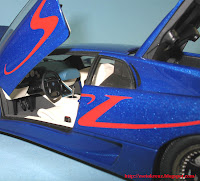 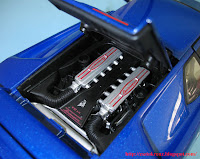 This batmobile is from batman begin, which is Batman very first vehicle. It's quite rare in market now, it can be found in 5-cars gift pack, trackset,action pack and movie special. If you really want to get this, your chance is to buy the trackset, which is still available at stores. The set will cost you rm49.90 though..

Introduced in 1926, the Bugatti Type 38 was conceived as a replacement for the Type 30 that had been in production since 1922. The Type 30 Bugatti has a special place in motoringhistory, for it was the first small 'straight-eight' to go into production and the first to use Bugatti's classic single-overhead-cam engine, one of the most famous automobile power unitsof all time.

Tomica Library (Part I of II)

Did you liked studying? Well most of us normal collectors don't really care too much do we but here is a good reason to re-look at them err.. books

The Tomica Limited Book Series were released over a period of three years from 2003 to 2005.

Qn: are these any different from the standard Tomica Limited versions? Well based on my understanding the answer is yes, there is still a slight difference in decal and other minor details.

No.03: Dome Zero (
Starscream collects from Regular Boxes to Box Sets and beyond

I have played 3 games of Tribune now, one 4-player game and two 2-player games. The 2-player game wasn't as poor as I have been led to believe from reading reviews of the game. I enjoyed them. So, what made me buy this yet-another-worker-placement-game in the first place? Well, this being designed by Die Macher designer Karl-Heinz Schmiel did play a part in getting my attention. The worker placement mechanism in itself doesn't excite me. From reading game overviews and getting a rough idea of how the game plays, the game did not seem anything particularly outstanding or unusual. The remark that made me decide to buy was that it is a very well crafted game. Nothing very gimmicky. Nothing ground-breaking. Just old-fashioned hard work producing a quality game. And after having played the game, indeed that is what I think of the game.

To help you achieve the victory conditions, you need to gain control of the factions in Rome (there are 7). When you gain control or take over control of a faction, you gain some benefits, and thereafter every round that you maintain control of a faction, you gain some other benefits too. And to fight for control over the factions, you need cards. Every round many cards are placed on the board, and the players place their pawns on the board to compete for cards. Each area of the board has a different way of competing for cards (or for other resources). Some are direct buys. Some involve auctions. Some cards are face-down and there is a gambling element on whether they are cards that you need.

A very crude summary of the game would be: get cards - control factions - fulfill victory conditions. That doesn't sound like much fun. However as I played the game, I found that there is a lot of planning involved - prioritising which factions you want to fight for, which victory conditions to strive for. Sometimes your decisions can be quite tactical, depending on what cards are available at the start of each round. You also need to watch your opponents, what victory conditions they are likely going to go for, what cards they have been collecting, what factions they are aiming for. There is a chariot in the game which is auctioned by blind bidding at the end of every round. The winner can use this to block a faction from take-over in the next round, or set it aside so that no faction is safe from take-over. This can be a very lethal tool. I find this analysis fascinating, and the competition very interesting. You have flexibility, and there are many options, but as the game progresses and more and more victory conditions have been met, your choices start to narrow down and you are forced to focus on your remaining victory conditions and forced to compete fiercely to be the first to fulfill them. There is a sense of build-up.

The game emphasises on take-overs a lot over maintaining control over factions you are already in control of. The take-over bonuses do not sound like a lot, but they are actually a big help towards fulfilling victory conditions. Also there are leader cards which give you a leader bonus when they are involved in a take-over. You cannot strengthen your hold on factions that you are already in control of, but others can weaken your hold by assassinating your cards. The only strong defensive move you can make to stay in control of a faction is the chariot. Of course you can also try to deny the cards of that faction from your opponents, but it doesn't seem to be a very worthwhile exercise. The game encourages you to scheme to do more take-overs. This creates quite a dynamic and aggressive play. There aren't that many means for defensive play anyway. 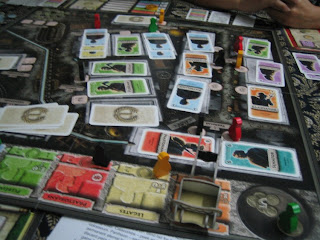 In all 3 games that I have played, the game ended after 4 rounds. I guess this is quite normal. The quick end surprised Sui Jye. I should have warned them of this better. I did know that the games usually end at 3 to 5 rounds from reading the reviews. After my first two games I thought that getting a Tribune is the hardest. You need to get a scroll first, and then you have to be in control one of two specific pairs of factions at the same time. This can be quite tricky because by the time you take over the second required faction, the first faction may have already been taken away from you. In my third game I realised that getting the favour of the gods is also not easy. You need to have had control of the vestal virgin faction first, and in that game Michelle made a strong move of denying me this control by using the chariot. This won her the game very decisively. And I was the one who taught her to do that. I complained that that was a nasty move, and she teased me for being so bitter.

I still look forward to play Tribune. Maybe this weekend.

Toy Collector invites GreenLight to spread the word about Diecast

Indianapolis, IN ( March 4, 2011) Whether you’re a manufacturer, retailer, dealer or collector you have to stay in touch with what is going on in the industry.  The explosion of social networks online has catapulted today’s die cast enthusiast into an endless supply of resources to gather information, share collections and discuss what’s hot.

Who says classic sport cars are not cool. Getting your hand on this car would change your mind, and you might even get addicted in collecting oldies.
Here's the exterior view of this diecast, modeled with excellent precision and details. The front lamp is movable, up and down.

Feel that the exterior is amazing? Just wait till you see what's under it.

And just as a reminder, this is just a model from autoart..Not the real car.

Highlight for the upcoming Hot Wheels models. These are hot!! At last my garage accessory set is here. I had been waiting for like over a year for this set. It is one of the very rare item, that made by a Die-Cast car maker. This set is made by Greenlight(GL), under the Muscle car garage accessory pack.
Greenlight was not very well know over Asia region. But it does make very detail cars. Like always, my wish is to see more of GL products in Malaysia.

This Accessory Pack come with six item. It is made by plastic and with detail paint job. It will look very cool if you place them near your 1/64 scale cars.
My next project is to look for figure to make it nicer. 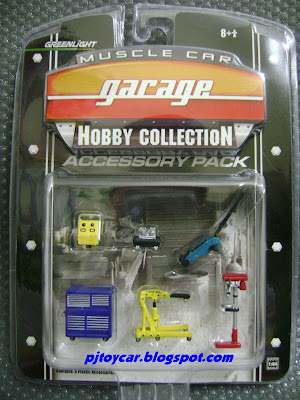 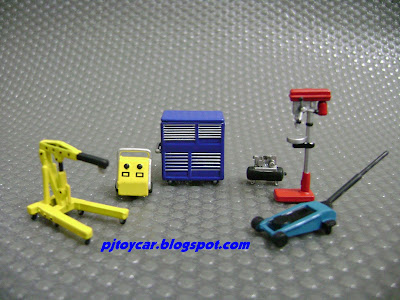 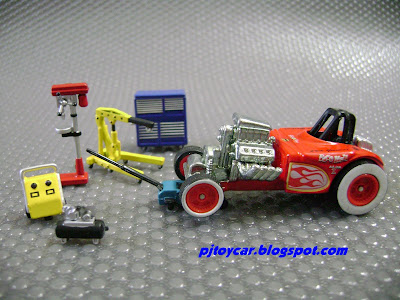 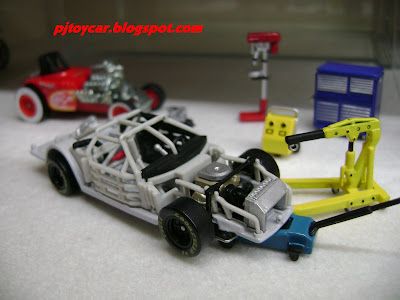 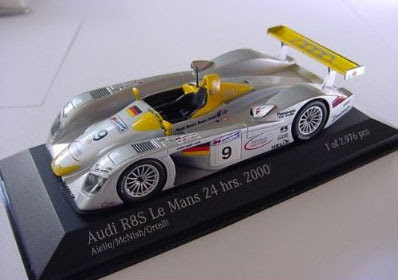 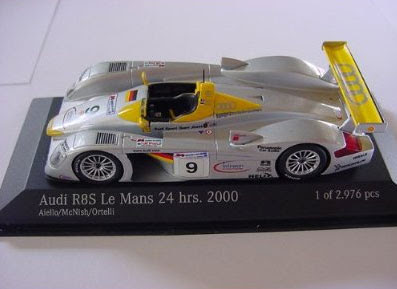 The team car, carrying race number 9, which had yellow identification markings and was driven by Aiello/McNish/Ortelli. The Minichamps model is accurately reproduced in size and shape. 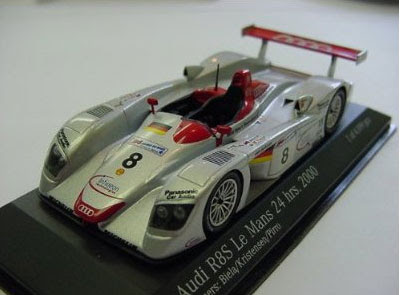 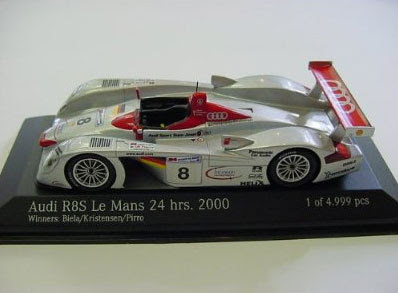 The winning car entered by Team Joest, carrird race number 8 and was driven to victory by Biela/Kristensen/Pirro. The car sported red identification marking on the nose, rear wing and on the cockpit surround. The cae was powered by a 3.6 litre V8, with a reputed power output of 610 bhp. The model is a limited edition of 4,999 pieces. 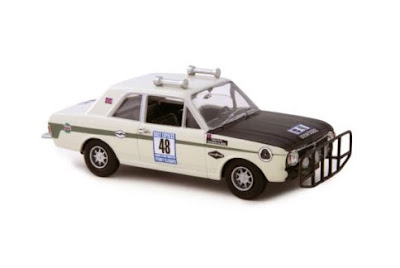 Undoubtedly, the first inter-continental rally, The London to Sydney Marathon was a true worldwide spectacle uniting drivers and enthusiasts from the 11 countries who entered, and marked the beginning of international rally-mania as it is enjoyed today. The indisputable star was the number 48 Lotus Cortina, driven by arguably then Europes finest Rally Driver Roger Clark and co-driver Anderson for the Ford Works Team, which led 8,500 of the events 10,000 miles.

I want to say thanks to all my wonderful friends who have supported my art, and my vision of racing history. 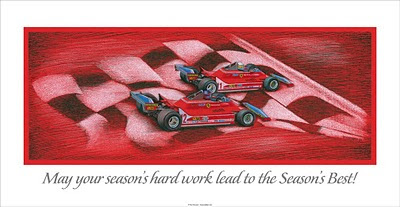 This New Year should be very promising and exciting, whatever it may bring ...

I want to wish you all the Very Best.

This sketch hows Jean-Pierre Wimille in a Bugatti Type 50B 4.7 L on his way to winning the first European post-war race, la "Coupe des Prisonniers", held in Paris.

The race was organized by Maurice Mestivier, the energetic president of the AGACI (Association Générale Automobile des Coureurs Indépendants) in honour of French prisoners and the missing of the war. 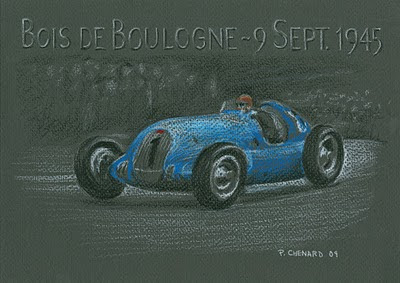 Belgian Olivier Gendebien and American Phil Hill celebrate their first of 3 Le Mans wins together; they also won together in 1961 and 1962. Gendebien also won in 1960 with fellow countryman Paul Frère. 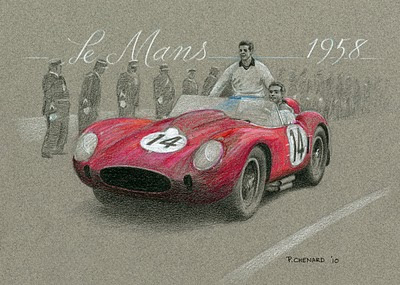 Their 3 wins together were with Ferrari; here they're driving in their winning 250 Testa Rossa.