story and images by Raed Ammari As a diecast collector, you tend to compare not just the models or the manufacturers, but you go all the way to the quality and the mistakes between like models. I have an older collection of Yat Ming models (about 70 cars in 1:64 scale) and could not help finding a few errors worth mentioning. Take for example, the two of blue Porsche 917 race cars , if you look closely at the photo, you will notice that the one on top has only 10 velocity stacks, unlike the one on the bottom with 12 ( go ahead and count them!).

Mondo Motor seems to have partnered up with BBC's Top Gear to present a 1:64 scale diecast series of miniature cars. The series seems to consist of sports cars, like the Mercedes-Benz SLS AMG and Maserati MC12.

Mondo or the BBC have done smart to give the cars a USP (Unique Selling Point): All cars feature the mythical figure of the Stig, the tame racing driver who does all the "power laps" for the television series.

We love toys but sometimes the quality and the care of details is poor. Despite this sometimes, also in cheap toys, we  find some details that we appreciate and remember.
This is the case of some cars reproductions for kids. Cheap toys with a love about details. The users of http://www.diecastlovers.com found a strange common detail between models of different makes and ages: the presence of dogs inside cars... 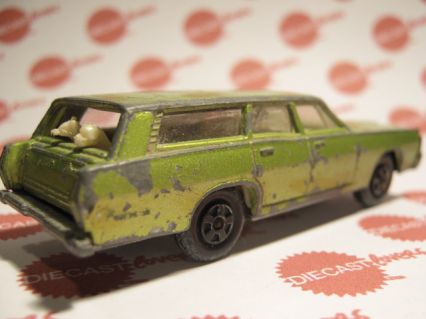 The History of Citroen in Miniature Part 1 (DS, SM and CX model reviews to follow)

André Citroën was born in Paris in 1878, he was not French, but of Dutch Jewish origin. His parents moved from Amsterdam to Paris two years for his birth. The history of the French brand of Citroën dates back till 1902. The factory produced cogs with a special tread in a V-shape that operated more silent than the normal treads. This tread became the symbol of the Citroën factory and is carried on all the cars. (the double Chevron)

Unlike the bigger scales, especially in small scale we have seen historically many vehicles that tow trailers. In the early days of SIKU, when they were making miniature cars out of plastic, we already had vehicles with trailers. Oter manufacturers too always seemed to like towing. Brands like Majorette, Edocar, Matchbox but also the "Made in China" variety always seemed to have liked selling these.

Greenlight recently released a set of 1:64 cars with trailers.